"I make a whole lot less than I did in New York City, but here my rent is only 1/5 of my income instead of taking up half of it."

Cut your expenses without cutting back.

Are you tired of your spending a huge amount of money each month just to get by?

Would you like to live a richer, more fulfilling life and be able to comfortably put some money away for the future?

Would you actually like to enjoy the fruits of your labor instead of just working to pay the bills?

You don't have to get a better cubicle job or double your hours to have more money left after the bills are paid. You just need to widen your horizons.

Lisa Besserman lived in New York City most of her life and was facing the prospect of looking for a new apartment in Manhattan because her lease was up. "The rental prices were absolutely ridiculous, super-expensive," she says. "My company was going through some changes and my job position didn't feel stable. I didn't want to be spending thousands of dollars on rent without being secure about my job." So she picked up and moved to Buenos Aires, where her rent is now $700 per month for a chic Palermo Hollywood two-bedroom in a doorman building with a pool. Her monthly health care costs have dropped from $800 a month to almost zero. The total private hospital bill after a bad ankle injury was $60. "To give you an example of the difference in drug costs," Lisa adds, "birth control pills used to cost $30 to $50 a month in the U.S. even with insurance. Here they same package is $5-$8 without insurance, just walking in and buying them."

Kris and Joel Cunningham were looking at working into their 70s if they stayed in Sarasota, Florida and were going to have to live very frugally there to make their savings last. So instead when Kris was 61 they moved to David, Panama and went from a $1,200 mortgage to a $385 rent bill for their home in a nice, safe neighborhood. "Fruit and vegetables cost a third of what we used to pay and our utilities are about a fourth of what they were." A bus to Panama City and back costs less than what they used to spend just to fill up their car's gas tank for the week. "You have to save such a huge amount of money just to get by in the United States when you finish working. It's a lot easier to just change your neighborhood."

Julie Fox and her husband are both teachers in Portugal, where they are working to live instead of living to work. "If you aren't extravagant, you can live well on a decent wage here," she says. "We put 1,200 euros a month in a joint account for expenses and occasionally there's enough left over for eating out and a bit of travel. We could probably do it on 1,000 if had to. We have a spacious three-bedroom house that would probably be 700 to 800 pounds sterling per month in England. We couldn't afford it."

I'm ready for a better life!

How are your finances looking?

If you live in a "rich" country, you're probably not feeling so rich yourself right now. If you live in the USA, Canada, the UK, or Australia, you're probably reeling from bills and housing prices that keep going up, but earnings that don't. If you're under 30, you might be crushed by student loans from ridiculously high university prices.

If you're over 30, you're probably wondering how in the world you're going to save enough for your retirement years while dealing with rising health care costs.

If you're on your way to retirement, you're probably downright scared about how you're going to make your savings last long enough to enjoy the kind of life you want in your golden years.

No matter what stats you look at, the top 2% are doing great, but the middle class is falling further behind. It's getting tougher to lead a comfortable, secure life financially for the person or family of average means.

If you want to improve your situation, you could try a few different things. You could get a higher-paying job somehow or take a second job. You could work overtime or hustle for more freelance gigs to work on at midnight. You could cut back on everything you enjoy in life and only spend on the basics you need to survive.

Or you could just move.

By relocating to a cheaper country, you can easily cut your cost of living by half and end up with a more fulfilling life in the process. While spending half as much, you could eat better, go out more, and have a better place to call home.

"My pension alone is 3-4 times what the average Nica makes," American Jim Lynch told me over coffee in Granada. "We spend around $1,800 a month, which is extravagant by local standards. We live in a big air-conditioned house with a swimming pool. We eat out whenever we want, wherever we want. Medical care is so inexpensive here we don't even have insurance. We just pay for things as they come up. I had to go to the best hospital in Managua for surgery and it was cheap enough that I put it on a credit card."

The last time my family lived in the USA, we were spending a crazy amount of money without enjoying it very much. Our rent for a not-very-large house in a good school district of Tampa was $2,000 a month. We needed two cars for commuting and just getting around. Most of the bills had three digits, from the internet/phone/cable bundle to cell phones for the family to electricity. Since I was self-employed, we were paying close to $1,000 per month on health care expenses. Add in food, insurance, business expenses, and all the various costs that pop up for a family and we were spending close to $5,000 per month. This for a family that lives a relatively frugal life and isn't very materialistic.

Despite all the outward signs of my success other people saw, we were racking up debt and struggling to live a rather simple middle class life in a mid-sized city, even though we were earning a good bit more than the median U.S. salary of $52,000 a year.

We moved back to Mexico in the nick of time in mid-2013. It took us a good while to get our empty house furnished and decorated, but meanwhile we were spending less each month even counting those expenses than we had been just on rent and utilities in Florida. Instead of struggling to scrape up enough money to go out to eat---or putting it on a credit card--we were now paying cash to go out multiple times a week and didn't sweat it.

I am now living there permanently. I can buy a healthy sit-down lunch for $3, a large fresh-squeezed juice for $1.25, or tickets to the symphony for $6. I can walk almost everywhere where I live and a taxi across town is $3 tops.

Our expenses dropped by more than half compared to living in the USA, so we can stress less about money and spend time enjoying life instead. We're putting money into savings instead of just hoping to cover the bills. What we earned before seemed to never be enough. What we earn now buys a life of abundance.

The interesting thing is, it's the same amount.

For any of the countries featured in A Better Life for Half the Price, two people can get by on two average U.S. social security checks, around $2,400 a month. In many places you can do it for far less. There are singles living in many of these countries for as little as $500 a month and if you're pulling in $1,500 a month, you're securely in the upper middle class. If  your family is spending $5,000 a month now just to get by like mine was, you can cut that in half and finally feel secure about your finances instead of scared.

Get a better life for half the price!

I want to help you go from barely making it or swimming in debt to a position of financial strength and happiness. You won't have to stop doing what you love or avoid going out to improve your situation. The operative phrase won't be "cut back and sacrifice," but rather "cut loose and start living."

If you're curious, pick up the e-book and I'll throw in some bonus reports to get you started. If you're serious about making the move, there's a more robust package with audio, video, and a private Facebook group to communicate with other people who are fed up with not getting ahead. For those who are all-in and ready, there's an advanced group package that includes all that plus live webinars tailored to favorite destinations, conference calls, and private coaching from me.

Ready to take the first step toward having twice as much money to spend or save each month? Click below to make it happen.

Tim Leffel
Author, A Better Life for Half the Price
Guanajuato, Mexico

P.S. If you're happier reading a traditional book, no problem. After you click the button above, look for the "Paperback" link in the navigation to go to Amazon. You can still upgrade to the community group if you like what you're reading. 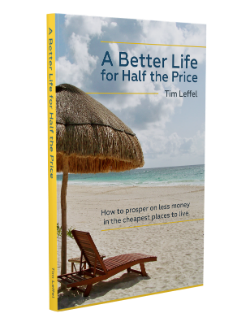 Show me the deals!