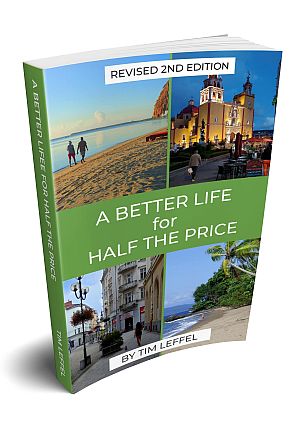 When Kirsten Raccuia and her husband were getting tired of the rat race in Chicago and wanted to move abroad, they eventually settled in Penang, Malaysia and have been there for six years. Now they pay $650 per month for their apartment of 2,300 square feet with ocean views, and “more closets than I have ever had,” she says. Kirsten estimates that their place would cost $5,000 a month or more in Chicago. Their total monthly budget is around $2,000 though without trying very hard.

James Leithart, who documents his experiences in the My Albanian Life section of his YouTube channel, admits he got a great deal living in Albania, but he pays a mere $90 per month for his one-bedroom apartment in the lakeside city of Pogradec. Blogger Anita Hendrieka avoided the two most popular months in Saranda and twice rented an apartment for $180 per month. Once it was a studio, but the second time it was a two-bedroom, two-bath place a five-minute walk from the beach. If you pull up rental sites in English for the capital city, Tirana, you’ll find dozens of attractive furnished apartments in the range of $300 to $800.

These are just a few stories of what real people are paying once they’ve moved from an expensive country to to one of the cheapest places to live instead. You’ll hear from several in each chapter of A Better Life for Half the Price, like Jonathan Look, who moved to Portugal:

“We rent a big, modern, 4-bedroom, 3-bath house, with a swimming pool for €1,000 per month. The house overlooks the Atlantic Ocean in an area known as the Silver Coast, about an hour from Lisbon. To live a comparable life back on the coast in the United States would cost double or triple what we spend here.”

Kris and Joel Cunningham were living in Sarasota, Florida, the kind of place many northern Americans dream of retiring to. They had no idea how they were going to make it on their earnings in retirement, however. They were paying $1,200 per month on their mortgage and taxes but if they sold and rented, they’d have to spend far more. So they moved to David, Panama and are now living a comfortable life on two social security checks. Their rent there is just $385 per month. With lower utility bills, food bills, and medical costs, they are very happy with their new life and are spending less than what is coming in, even factoring in regular travel.

Mariellen Ward moved from Toronto to the yoga center of Rishikesh in the foothills of the Himalayas and found a furnished apartment in a secure gated community with its own electricity system. It’s 1,200 square feet with two bedrooms, two bathrooms, two balconies, and a roof deck.

“Someone referred me to this place before I even got here and about a week later, I moved in. The manager told me it was ‘very expensive’ when I said I liked it, so I was worried. Then he told me the price—$350—and I was thrilled.”

You’ll find more than 60 tales like this in the book A Better Life for Half the Price from more than 20 countries that offer a great quality of life for far less than what you’re spending now. If you sign up for the community packages, you’ll be able to ask questions of the cheap living abraod community and me to find out more. I’m living the half-price life myself in central Mexico, with my family, where we eat out more, travel more, and don’t have to pay 1/5 of our income on health care.

This is no longer a strange or radical transformation. There are millions of people out there living a better life for half or less what they used to spend in the USA, Canada, England, or Australia. They’re scattered across value-priced locations stretching from Patagonia to Mexico, from the beaches of Thailand to the mountains of India, from the west coast of Europe to Transylvania. Some are retired and living the dream life they imagined, others are still working in a remote job or on their location-independent business.

You’ll hear from couples living an extravagant life for less than $2,000, singles who have cut their expenses from $4,000 to $1,400 while upgrading their apartment, and retirees who are living well on just their social security checks. Instead of cutting back, they’re cutting loose instead. You can opt for cheap living abroad on a shoestring, or spend bigger and live a rich life instead of just scraping by.

Where I live in Mexico, $1 will get me a large fresh-squeezed juice, three pastries from the bakery, more than two pounds of warm tortillas, at least two pounds of any fruit, or a happy hour beer in a bar. A taxi across town is $3. How do those costs compare to where you are now? I’m one of the 1.5 million expats in Mexico who is eating out more, having a maid come every week, and getting health care check-ups without worrying about what the cost will be. Through international living, I’m stressing less about finances and enjoying life to the fullest instead.

If you’re just curious, I’ve got a great book for you that will tell you whether this is a life worth pursuing.

If you’re already committed, you can get more reports, join a dedicated community, and tune in to interviews with expatriates from places you may want to live in.

If you’re all-in, you can do all that and also get your questions answered by the people who know the answers.

See more stories from expats living abroad for far less than they were spending before.